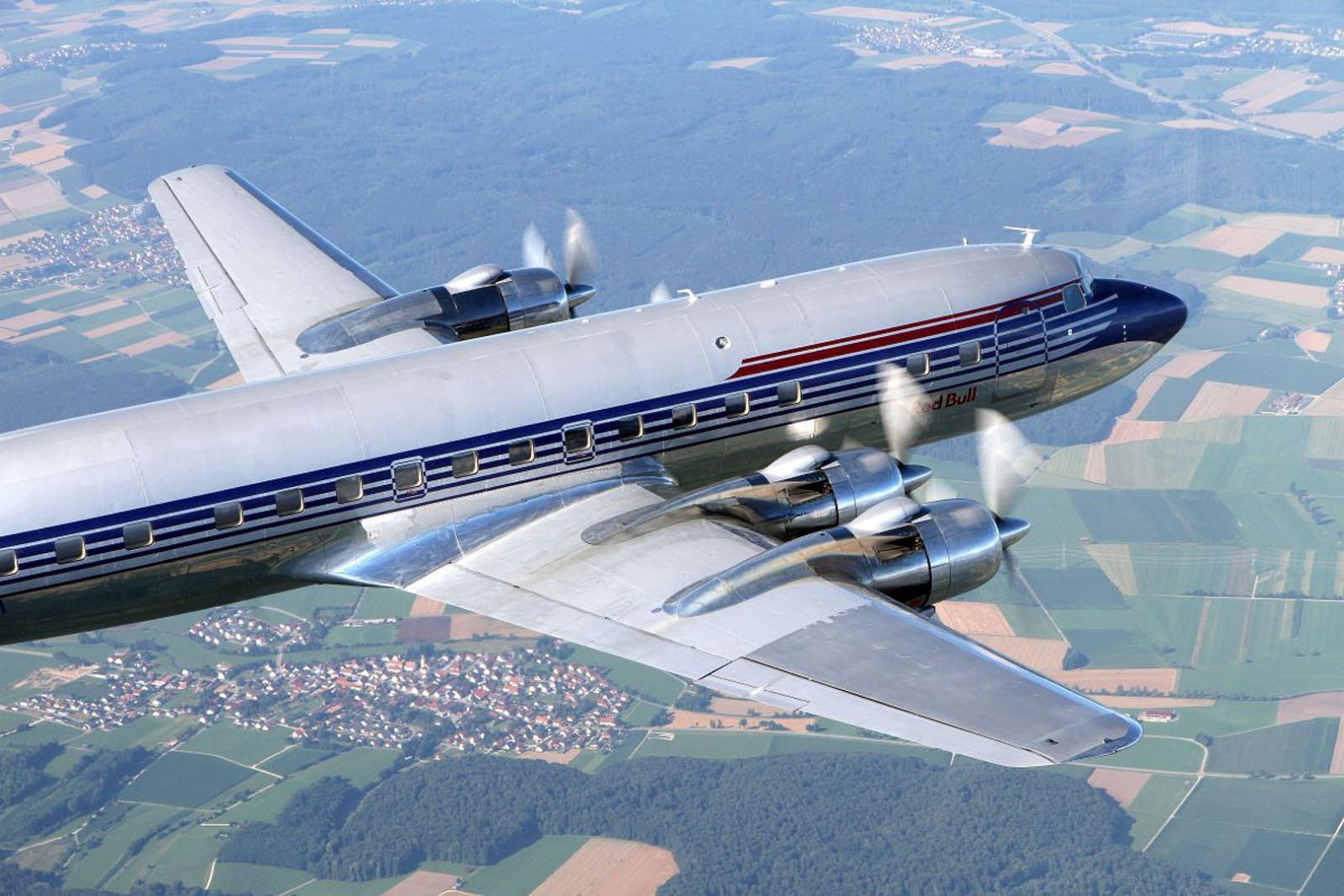 We bring you two new fabulous videos of the stunning Red Bull DC-6B which is unquestionably the world’s most magnificently restored vintage aircraft.

The DC-6, built by the Douglas Aircraft Company, is the finest four-engine piston engine aircraft ever built – the best being its older sibling the twin-engine DC-3.

Red Bull’s account of its history is as follows:

The DC-6 was delivered to the national Yugoslavian airline JAT and used by the head of state Marshal Josip Broz Tito who had it converted to a luxury plane for himself and his guests.

In 1975, the plane was sold to Zambia’s head of state Kenneth Kaunda and he also used it as a VIP airplane.

Next Chris Schutte, an operator of small airline business in Windhoek, Nambia, stumbled upon it and its sister ship and purchased them both.

Both airplanes were in service in Schutte’s business until 1999 sight-seeing over West Africa, tour flights to the Victoria Falls, and promotional flights.

In March 2000, Sigi Angerer, the former head pilot of the Flying Bulls (retired 2013), read in an airline magazine that a DC-6 was for sale in Africa. He acted fast, and two days later he met with Chris Schutte at the airport in Windhoek to draw up a preliminary contract.

On July 7, 2000, the plane took off in Windhoek. Onboard were Sigi Angerer, two experienced captains from South African Airways, a film team, the flight engineer from Schutte’s business, an assortment of replacement parts, and a lot of oil for refueling. The flight to Salzburg took four stages, lasted nearly 28 hours, and went without a hitch.

The restoration began in 2001 at a factory constructed in part for the DC-6. It left the factory in the summer of 2004, three years and tens of thousands of hours later. The plane’s registration in Namibia was canceled and transferred to an American register under the identification number N996DM. It received a completely new interior–true to the overall historical concept as far as possible–, four new engines, and modern flight electronics. During the extremely complex restoration work, the airplane was completely dismantled into individual components and then reassembled. The plane’s condition was not as good as originally thought, requiring considerably more work than expected. But there’s a happy ending–not only the virgin flight but also the unanimous judgment of the experts prove that this airplane is better now than it ever could have been when new.

In July 2013 the DC-6B was finally given Austrian citizenship and now operates under the Austrian registration OE-LDM, making it the first DC-6B to ever receive an Austrian code.