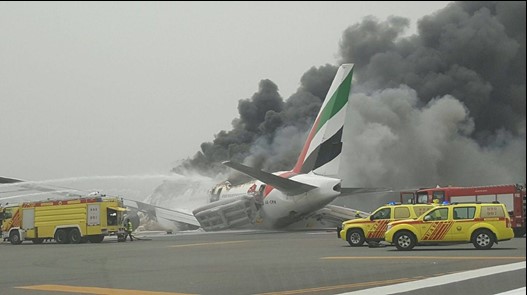 INVESTIGATORS probing a fiery crash of a Boeing 777 in Dubai on Wednesday are set to focus on the actions of the pilots and the aircraft's operation after Emirates chairman Sheik Ahmed bin Saeed Al Maktoum dismissed speculation of a security breach.

Dubai International Airport was closed for almost six hours after the 13-year-old Boeing 777-300, registration A6-EMW,  struck the runway while apparently attempting to perform a go-around about 12:45am local time.

The aircraft, travelling to Dubai from Trivandrum International Airport in Thiruvananthapuram, India,  was destroyed by fire but not before its 18 crew managed to successfully evacuate the 282 passengers with only minor injuries.

A firefighter who lost his life when the plane exploded in a fireball has been hailed as a hero.

Speaking during a media conference in Dubai, Sheik Ahmed commended the professionalism of all teams handling the crash.

"Evacuation procedures were executed professionally,’’ he said “Cabin crew were the last to leave the plane.’’

However instead of the required 90 seconds the evacuation was well over 3 minutes due to some passengers taking their carry-on baggage with them.

Dramatic footage from inside the plane shows pandemonium as smoke fills the cabin and passengers ignoring one of the key rules of aircraft evacuation as they hurriedly grab their luggage.

The Sheik said he ruled out “anything in terms of a security issue’’ and also dismissed suggestions of a fire before the plane landed. “There was no fire on the plane before the incident,’’ the ABC translated him as saying.  “The fire and what we saw was caused after the plane crashed.’’

He said The Emirati captain and Australian co-pilot each had over 7000 hours flying experience and that the aircraft was up to date with safety checks. He could not comment on whether there had been problems with the landing gear but said wind shear, an unpredictable change in wind direction or speed, had been reported on runways. .

Respected air safety website Aviation Herald, reported that air traffic control recordings showed the aircraft performed a normal approach but the crew were reminded to lower the landing gear as they were cleared to land.

However experienced pilots told AirlineRatings.com there was no way that the crew would not have known that the undercarriage was not down because of multiple warnings once the landing flap configuration had been selected.

“About 2 minutes after EK-521 reported on tower, the crew reported going around, tower instructed the aircraft to climb to 4000 feet, ‘’ the Website said. “The crew acknowledged climbing to 4000 feet, a few seconds later tower instructs the next arrival to also go around and alerts emergency services.’’

A pilot who witnessed the incident told NDTV that the plane came in really hard and hit the runway tail first.

"Big flames then the body hit the runway and the right gear collapsed, followed by the right engine coming off. Then it skidded for a while until it stopped," the pilot said.

NBC News Digital chief technology officer Krishna Bhagavathul was in the terminal overlooking the runway. "The fire began to spread rapidly and by the time the fire engines got there the entire top half of the plane was on fire," he told the US network.

He said flames "seemed to be coming from the rear or back of the plane."

Mr Bhagavathul said the blaze was "under control within 15 to 20 minutes."  At least three fire engines attended the crash.

Dramatic footage from inside the plane shows pandemonium as smoke fills the cabin and passengers ignoring one of the key rules of aircraft evacuation as they hurriedly grab their luggage.

One report quoted passengers as saying that minutes before the flight crash-landed, the pilot made an announcement that he needed to make an emergency landing.
Ibrahim Thomas from Thiruvananthapuram, was sitting in the front row window seat of the flight and said he was lucky to make it out alive.

“I saw the right side engine caught fire and then it was in the cabin,’’ he told MailOnline.” In another five minutes the emergency doors were opened by the crew.’’

While it is too early to determine the cause of the crash, there has already been speculation as to why the aircraft did not have enough power to complete the go-around.