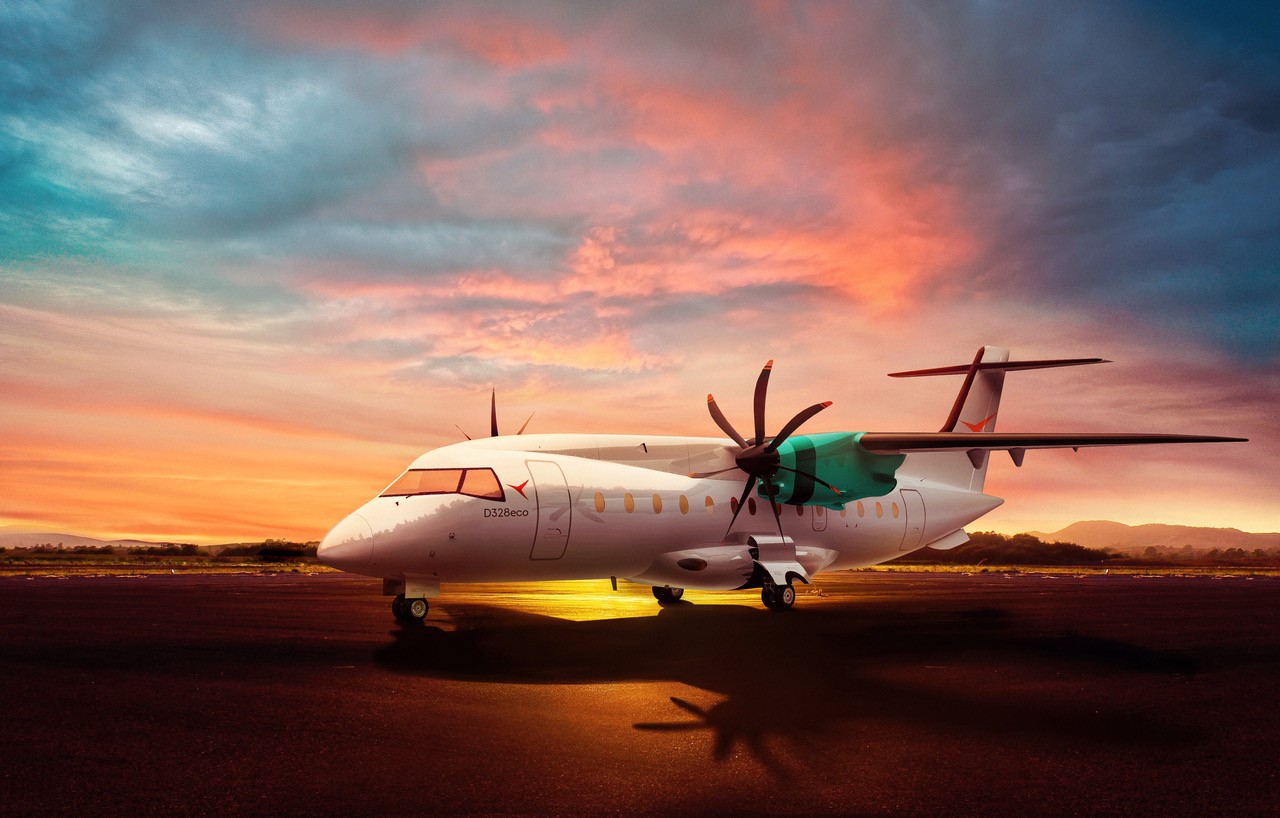 Deutsche Aircraft is giving Dornier’s short-haul champion, the Do 328, a new eco lease on life with a new model due to enter service by 2025.

The 30-seat German-built turboprop Dornier Do 328 was way ahead of its time when it first entered service in 1993: It had a glass cockpit, a quarter of it was made from composite materials and it was flying almost as fast as a jet, with a cruise speed of 640 km/h.

And it holds a rare distinction in aviation: It was the only passenger aircraft ever where the same airframe had two options of propulsion – as a turboprop or a jet, with the Do328JET entering the market in 1999.

These variants were offered in the context of the 1990s when turboprops had a reputation of being out-dated, slow, and noisy. All of which was not true for the Do 328 with either mode of propulsion.

Then the former manufacturer DASA (Deutsche Aerospace, later renamed Daimler Chrysler Aerospace, at the time also the German Airbus partner) divested of the regional aircraft business and Fairchild Dornier took over, then AvCraft aviation, before the premature end for the Do 328 came due to market conditions and over-expansion of Fairchild Dornier following by its collapse.

But the concept prevailed, today about 150 aircraft are still in the air, even the US Air Force operates a military special mission version as C-146A Wolfhound, having gone through a remanufacturing process at the original assembly line south of Munich.

That is run by a 328 support company founded in 2005, “always with the idea of a production restart”, says Nico Neumann, VP Operations and Programs for Deutsche Aircraft, the new company name, in an interview with Airlineratings.com

READ: Qatar Airways A350 is the ultimate Airbus aircraft.

It’s backed by the US-based Sierra Nevada Corporation (partner in NASA’s new Dream Chaser space plane) and German state funding, and it aims at no less than re-introducing a new iteration of the Do 328 by 2025, now called D328eco.

It will feature a fuselage extended by 2.10 meters, capable of carrying ten passengers more than the base model, 43 in total now, and will be equipped with new engines and a new avionics suite.

About three decades after production started for the original Do 328 in 1992, manufacturing is going to start all over again soon. “We are currently in the preliminary design review phase and are busy setting up a new organization and the engineering department, then we start work on the prototype,” says Neumann.

Currently, Deutsche Aircraft employs 180 people at its home base. Through all the changes, know-how, and hardware of the last airliner ever to be fully developed and manufactured in Germany has remained at its birthplace.

“The current sustainability trend could lead to a revitalization of the turboprop, which is almost as fast as jets on short routes but can save 20-25% fuel and thus CO2 emissions,” the head of the aircraft program points out.

“The Do 328 as a platform offers a very good base”, Neumann says, production tools of the base model are still available and even aircraft components and parts of the original design can be taken out of storage. “We aim at making the D328eco compatible for the use of 100% sustainable aviation fuels,” he pledges.

The concept is also supposed to versatile enough to be adapted to single-pilot operations over time. “We have to see how much we can adapt the new avionics suite already for being operated by just one pilot,” says Neumann.

New Pratt & Whitney Canada PW127S turboprop engines are giving the now heavier aircraft additional thrust, its maximum take-off weight has been increased to 15.6 tons, equalling that of the Do328JET.

Technologically the adapted design is not overly challenging, the original type certificate will be amended, rather than aiming at a new one, simplifying and speeding things up. Production and final assembly will not take place at the traditional base in Bavaria, instead, a brand new facility will be built from scratch at Leipzig/Halle airport in Saxonia, formerly East Germany.

Here Deutsche Aircraft enjoys major financial support by the federal state as well as gaining from superb infrastructure, including one of the main DHL courier hubs in Europe at the airport, easing the supply chain.

Besides claiming entry into service for the D328eco is set for 2025, the manufacturer is not very forthcoming with timelines. The first flight should be expected in 2022 or 2023, “we will start the test flight campaign with a modified Do328,” reveals Neumann.

The crucial question remains market acceptance. “We want to be a replacement for aging 27-40-seaters, everything from the Dash 8-100 to -300, Saab 340 or Embraer 120 with around 25 years of age is our most important market potential,” according to the VP.

Also, growth markets in Asia as well as African carriers, which can benefit from the D3283eco’s capability to operate on unpaved runways, are targeted. The German company sees the ATR-42-600 as the only existing competitor, “everybody else has to develop something new,” says Neumann.

He sees the total market volume in this segment as being 4,000 aircraft, but wouldn’t say how much of it Deutsche Aircraft wants to capture. “We don’t want to release predictions, but we assume we can sell more than the 217 the original Do 328 sold.”