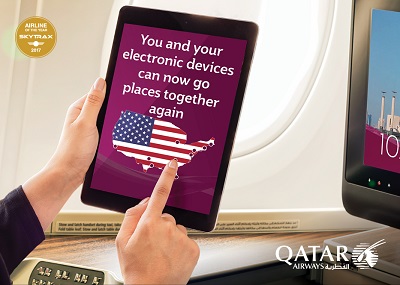 Fears new security requirements for US-bound flights may be difficult to implement have not stopped the Gulf states from moving quickly to get the controversial US  “laptop” ban lifted.

Qatar has now joined Emirates, Etihad and Turkish Airlines in convincing US security officials that airport procedures are robust enough to allow large electronic devices in the cabins of flights flying directly to the US.

The US sparked an international row in March when it banned large electronic devices on US-bound flights originating in 10 North African and Middle Eastern countries.

The ban was introduced with little warning or consultation with airlines and widely criticised by the airline and travel industries. Some commentators contended it was aimed at furthering the interests of US carriers opposed to an expansion of Gulf airlines in the US market.

The controversy escalated when the US Department of Homeland Security mooted restrictions that could take in European airports and possibly others around the world.

However, pressure from the European Union and airlines saw the the US late last month back away from a wider ban and instead impose tighter security protocols for 280 airports in 150 countries.

The measures, expected to affect an average of 2100 flights and 325,000 passengers a day, included a boost to overall passenger screening, heightened screening of personal electronic devices as well as increased security protocols around aircraft and in passenger areas.

Airports will also be expected to deploy advanced technology, expand screening by dogs and look at establishing additional preclearance locations for travellers heading to the US.

It is understood an initial requirement was the addition of explosive trace detection equipment, already used in many airports, to the security screening process.

Qatar said the electronic device ban was lifted after US officials inspected security measures at its hub at Hamad International Airport.

“The security measures in place in Doha allow us to continue to provide our renowned world-class service for all our passengers travelling to the U.S,’’ Qatar Airways Group chief executive Akbar Al Baker said in a statement.

“ We look forward to providing our passengers an even greater choice of U.S. destinations soon, with the addition of San Francisco to our expanding network, on board the most modern of aircraft including the Airbus A350 and our Qsuite retro-fitted Boeing 777 aircraft.”

Qatar announced recently that it intends to make an initial investment of 4.75 per cent in American Airlines with the aim of building  a passive stake of up to 10 per cent in the US carrier. The plan received a cool reception from American executives. With chief executive Doug Parker describing it as puzzling at best and concerning at worst.

The airline is currently battling sanctions from several of its Arab neighbours but is maintaining its wider international operations.