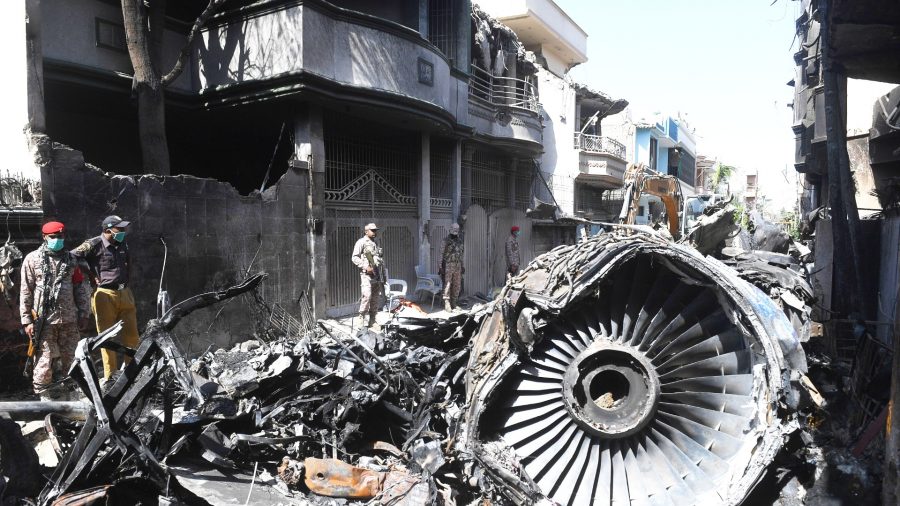 A completely unacceptable approach preceded the tragic PK8303 crash at Karachi May 22, which killed 97.

According to Juan Browne, a 777 pilot, (blancolirio on Youtube) the Flighradar 24 data shows that the pilots of the A320 descended at twice the normal rate and went across the runway threshold at 210kts (388km/hr) well above the recommended 140kts (259km/hr).

Why the undercarriage was not lowered is not yet clear but possibly because of the crew’s efforts to get the A320 onto the glideslope pre-occupied them.

Speed is an issue as it will not deploy above 260kts.

Both the FDR and CVR are recovered and the reading of the data will start in France on Tuesday, June 2nd.

According to Aviation-Safety.net the circumstances of the crash are thus;

About 14:32 the flight reported to the air traffic controller of Karachi Tower that they were descending from 3500 to 3000 feet and established on the ILS for runway 25L. The controller replied: “copy that, turn left heading 180”. Because that would take them away from the ILS approach the flight replied, “Sir, we are established on ILS 25L”. The Tower controller then stated they were 5 miles from touch down and subsequently cleared the flight to land.

According to the ILS approach chart for Karachi Airport, an aircraft a distance of 5 DME should be at an altitude of about 1680 ft. Transponder altitude data captured by Flightradar24 suggests that the aircraft was descending between 4050 and 3725 feet at the time the controller reported that the flight was 5 miles out.

The aircraft continued the approach. What exactly transpired is unclear at this time, but ARY News quoted from a CAA Pakistan report that stated scrape marks from the no.1 engine started on the runway at 4500 feet (1370 m) from the runway threshold followed by no.2 engine scrape marks at 5500 feet (1675 m).

The crew initiated a go-around and during that attempt for a second landing the engines which were damaged failed.

The graphic below from Aviation-Safety.net shows the altitude of PK8303 in blue. Capt Browne has added the brown line showing the correct altitude approach using the ILS. The difference is extraordinary.

However, it may well be that the pilot’s captured a “false glide slope” of 9 or 12 degrees instead of the usual 3 degrees.

The issue is, according to BoldMethod.com, “objects below 5,000 feet AGL have a tendency to reflect glideslope signals. This can create false glideslopes, which are often at 9 degrees and 12-degrees angles to the runway. This is why pilots are always taught to intercept the glideslope from below, to ensure they don’t capture a “false” glideslope.”

However, the very steep angle of descent should have tipped the pilots off that there was a serious error.