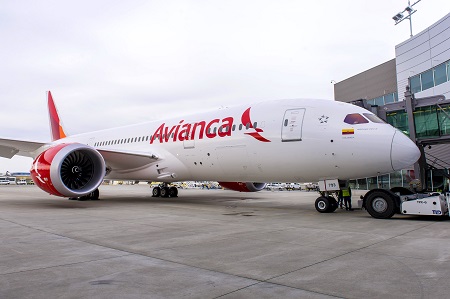 US aerospace giant Boeing delivered its 500th 787 Dreamliner to Colombian carrier Avianca this week,  underscoring how the composite plane has become a common sight around the world.

Despite the enormous teething problems with the aircraft and the drama of overheating lithium batteries early in its career, the pace of delivery for the 787 has been the fastest of any twin-aisle aircraft to date. It took the Boeing 777 nine years to reach the same milestone.

Boeing is now building 12 Dreamliners per month, another industry record, and still has a backlog of more than 700 orders. It builds the plane at factories in Everett, Washington, and  Charleston,  South Carolina.

“Achieving 500 deliveries – the fastest to 500 for twin aisles – is a great accomplishment, made possible by the hard work and dedication of our employees and global suppliers,” Boeing Commercial Airplanes vice president and general manager, 787 program, Mark Jenks said in a statement.

The 787 is now flying more than 530 routes globally and customers have used the fuel-efficient plane to pen more than 120 new nonstop routes, many of which were not possible before its entry into service in 2011.

Since that time, according to Boeing, the 787 fleet had grown to include 48 operators, who have collectively flown 696,000 revenue flights, carrying 133 million passengers over 1.7 billion revenue miles.

The Airbus challenger to the 787, The A350 XWB, entered service with Qatar Airways in January last year.

Despite the growth of the 787, Boeing is looking at further job cuts in its commercial aircraft business in the New Year and slowing production of the Boeing 777.