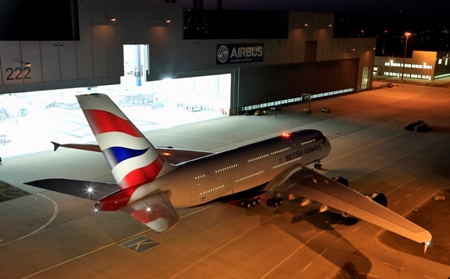 British Airways first Airbus A380, registered G-XLEA, made its debut at the Royal International Air Tattoo soaring with the world famous Red Arrows above the Royal Air Force base at Fairford in Gloucestershire.

RIAT celebrated over the weekend of July 20th and 21st is the world’s largest military air show but it was the giant A380 that stole the show.

British Airways will put its first A380 into service on routes between London and Los Angeles, Hong Kong and Johannesburg. The airline has configured its A380 with 469 seats; 14 First Class pods, 97 Club World [business] beds, 55 World Traveler Plus [premium economy] seats and 303 World Traveler [economy] seats.

Unlike all other airlines operating A380s British Airways has opted to have business class on both decks. All premium classes are to the front of the aircraft allowing for faster disembarkation.

While the A380, like all Airbus aircraft is assembled in Europe, the wings are made in the United Kingdom.

Watch the video below.