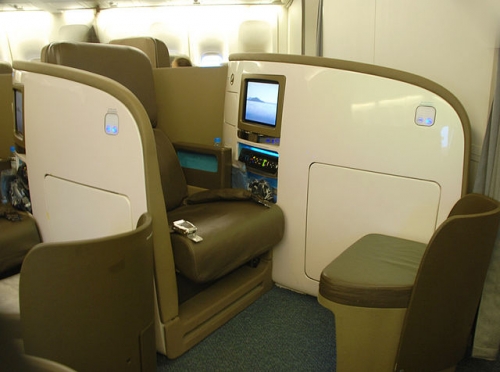 Australia tends to cast New Zealand a kindly but condescending glance. The way Sydneysiders think of Perth. Or Northern America looks up to but down on Canada. Sure, they’re quaint and cute and friendly, and it’s a fine old spot for a jaunt or a bit of money laundering but c’mon, they’re just not in our league.

Air New Zealand is quaint and cute and friendly. And it is a particularly fine way to get to a particularly fine spot. They have those cool safety videos and groovy argyle socks and flight attendants who give you an affectionate handshake after touchdown and thank you for flying with them — and mean it. It’s also completely out its league.

There’s a reason — nay, a multitude of reasons — why AirlineRatings.com recently named Air New Zealand the world’s best airline. Like the good folk of New Zealand and their beautiful country, Air New Zealand manages to maintain that charming insouciance and warmth while absolutely belting it out the park in terms of quality, hospitality and dazzling world-class excellence.

A trip to must-visit Queenstown on NZ176 aboard one of Air NZ’s sharp new Dreamliners is a special experience.

Step aboard this shiny, whisper-quiet shuttle with its ingeniously-designed business Premier-class cabin. Feel genuinely, warmly welcomed in a way you’ve rarely experienced on an aircraft (by cabin crew wearing the coolest uniforms in the sky). Names are exchanged, hands are shaken. You’re mates right away, but only if you want to be. You feel like you could sit down and play a hand of euchre with the flight attendant while swapping Spotify playlists. You could also only speak to them when you want another Portuguese port and they’d also get your vibe and respect your space.

The cabin is configured to maximize both space and comfort. While not as spacious as some business-class seats, these lie-flat babies are as comfy as any in the sky. Converting them into a bed is a slightly complicated affair, but your cabin crew mates are right there to talk first-timers through it or just do it all for you.

French champagne arrives minutes after I take my seat and pop on the aforementioned turquoise and magenta argyle socks. It’s Charles Heidsieck if you don’t mind. There is also Deutz, a magnificent local NZ sparkling wine.

The menu, designed by celebrated chefs Michael Meredith and Peter Gordon, make for exciting reading. For lunch I had a luxurious smoked snapper brandade with poached prawns preserved citron salsa verde and pine nuts. The garlic bread of your carb-and-garlic loaded dreams. The best in-flight dish I’ve ever eaten: blackened salmon with citrus labneh, saffron mash, edamame and steamed spinach. It would have been sublime at sea level let alone at cruising altitude.

I politely decline dessert but am even more politely ordered to order the ginger nut ice-cream with dark chocolate sauce and ginger wafer. Thank goodness I did.

The intuitive in-flight entertainment system is the best curated selection of music ever found on a plane. Likewise the movies, tv shows and documentaries, all of which can be enjoyed in your little cocoon with fancy headphones.

Despite the myriad new released on offer, I watched Tom Cruise (back when he was hot) in Cocktail while drinking Sherwood Pinot Gris from the Waipara Valley.
Dinner included a hot-smoked Tasmanian salad in a kind of Nicoise style and handmade Italian meatballs (a textural, tasty combination of pork and veal mince) app soft polenta, a deeply-flavored tomato ragu and plenty of proper parmesan. Once again, I was unsuccessful in my attempts to rebuff dessert advances. Sure, I’ll have a decadent cheese platter. And a glass of sticky? Why not.

I like to think could have slept standing up after that gluttony but let’s be honest: the Dreamliner flat beds come pretty easily after all of that, though the deluxe memory-foam mattress, plush doona and two full-size pillows really helped.

The return trip to Perth is just as delicious, both culinarily and generally. The lounge at Auckland airport is one of the sexiest we’ve seen, with both a full-service bar and DIY area.

Air New Zealand epitomises its Kia Ora catch cry.  A tip for the flag-waving Australian traveller: Don’t be fooled into thinking we’re better or that our national airline is best. Those New Zealanders sure are sweet, but they’re not so innocent after all.

Amanda Keenen was NOT a guest of Air New Zealand.