Whenever you book Thai Airways, you take your chances on the airline deciding to swap out the aircraft from underneath you. It’s usually pretty good about operating its Tokyo Haneda-Bangkok Suvarnabhumi flights with its 747-400s, though, and so I redeemed a very modest amount of United frequent flyer miles to fly it on the overnight redeye, which leaves Tokyo at 0020 and arrives in Bangkok at 0710. 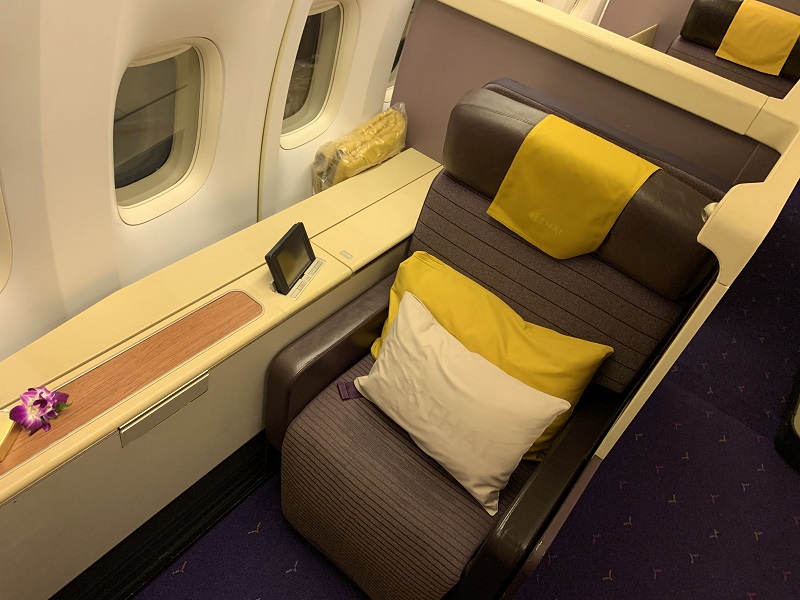 Nine seats fit into the nose, with six next to the windows, two in a pair at the rear of the cabin and a single “Captain Kirk” seat in the middle, 2E.

Thanks to some heavy gardening of my reservation I managed to move up from row 2 to 1K, both for the pleasure of sitting in the far nose and because there’s less disturbance coming past you: nobody, not even the pilots, unless there’s someone hiding in the linen closet.

The seat is fine: it’s an older style first-class seat with some privacy elements, but crucially isn’t a suite. There are some seats where that’s okay, and the privacy designed into the seat doesn’t make you feel like you’re on show. This seat, though, isn’t one of those, at least in row 1. Given that the nose narrows, the seats are almost pointing together, so there’s an awkward “hello, how are you” nod that could have been fixed by the application of some shrouding.

In seat mode, it was very comfortable and highly adjustable, as you’d expect from first class, and in bed more it was pleasantly spacious even for my 1m 90cm form. I got a good few hours’ sleep on this overnight redeye.

Amenities came in a Porsche Design hard-case and were from Payot. I didn’t care for the scent, but I can’t fault the range of products on offer, from a facial mist to an eau de toilette. 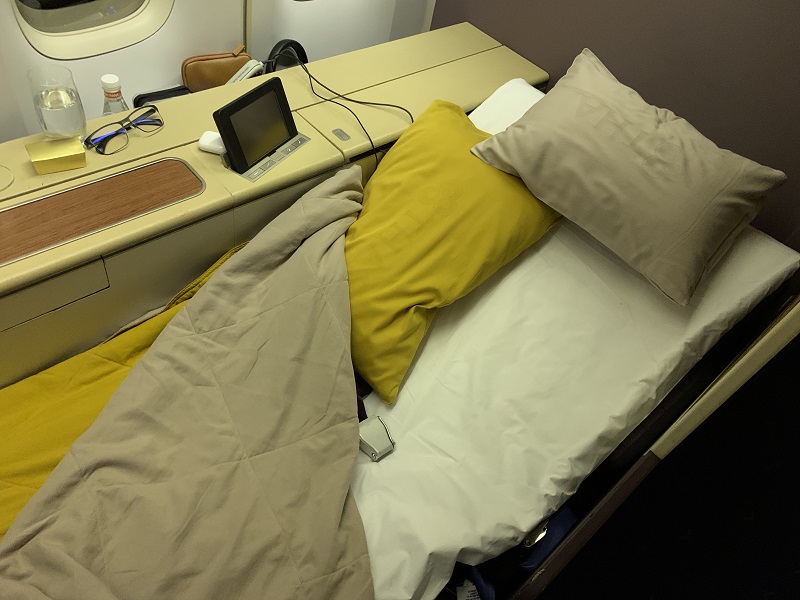 Thai is one of those airlines renowned for its service and hospitality, and that was in evidence on this flight, even though it was a redeye where the crew were in “serve swiftly, put the cabin to bed for those who want to sleep” mode. They were uniformly delightful, and proactive in the cabin without being obtrusive. Sterling stuff. 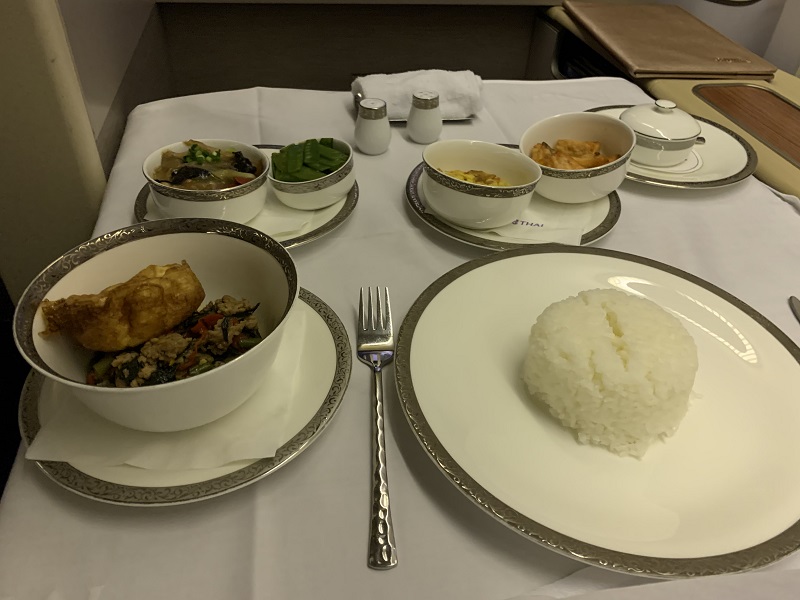 Interestingly, this 747 had what I’ve always thought of as the “KLM galley” configuration: the space between doors 1 and 2 on the starboard side of the aircraft is entirely given over to a galley parallel to the aircraft, rather than the more usual galleys between doors or at the front and back of the aircraft.

Crews love it for the amount of workspace, and anecdotally passengers benefit from a speedier meal service.

I’d preselected fabulous minced pork with Thai basil, which was really delicious, very Thai in flavor profiles, and spicy enough to get my sinuses working (a plus in these older, dry-air aircraft).

The preselection process could use work, though: it’s basically calling up the airline and having them send you a PDF file with the names of dishes, and you taking pot luck with the names.

And, look, you fill me full of Dom Pérignon for a couple of hours, and wake me up with delicious fresh orange juice and several pots of tea, and it’s full food & beverage marks from me. 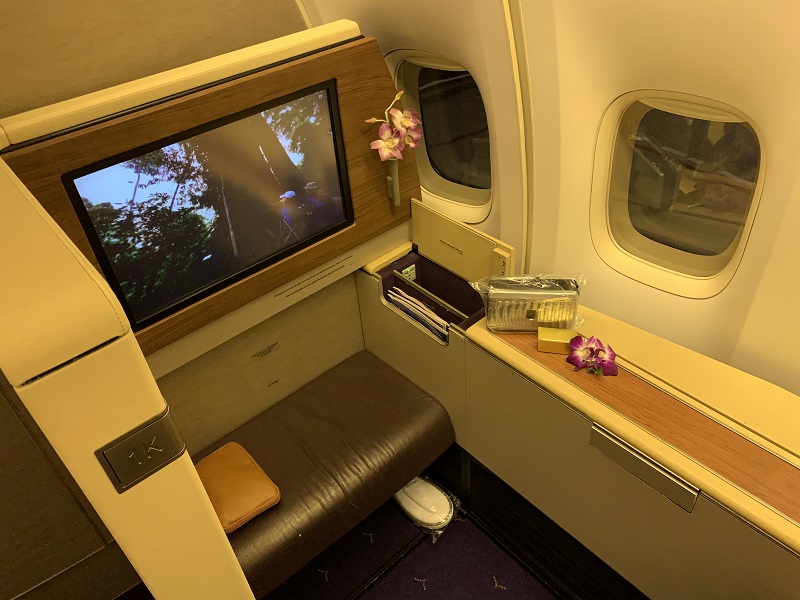 Let’s be clear: nobody books a flight on an old 747 for the IFE selection. I certainly didn’t, and I couldn’t find a single thing I wanted to watch on the elderly, clunky system and its low-res screen.

Despite an iPad full of content, the best IFE was gazing out the window at a thunderstorm en route. That’s something you can’t watch anywhere else.

The seat was OK, the food and wine excellent, the IFE very meh, and the crew brilliant. But the X-factor was the Queen of the Skies, and particularly the nose cabin. There’s nothing else quite like it: fly it while you still can.

Every seat had a decent sized pillow with a cotton pillow slip. Blankets were standard economy size and don’t quite cover you full length if you’re tall but pretty close. The seat pitch was a comfortable 32 inch with an approximate 6 inch recline. The seats were the new slimline seats which I personally find get quite hard over a long haul trip. No in seat power or USB ports. The entertainment boxes under the seat took up the usual 5 inches of space under the seat in front

Outstanding. Even on overnight flights the crew are attentive and carry out service throughout the whole flight in terms of drink runs and answering to passengers call bells.

There is something about the purple plastic crockery used in Economy Class on Thai Airways that always impresses me. On the tray was a salad entree, bread roll with butter, fruit salad and dessert. For the hot main meal there were two options, a Thai noodle dish or a curry. Drinks were served between the dinner and breakfast service regularly. There was no snack bar. On day flights, drinks and peanuts are offered before the main meal service. On our flight to Thailand we were offered a delicious breakfast and then before landing a substantial cold turkish bread sandwich rather than a whole meal which was more than ample. Hot towels are provided to all passengers before the main meal.

Extremely user friendly in flight entertainment with large clear screens. There were many options for people all over the world. The kids programming was also extensive. There would absolutely be enough to keep you occupied on a long haul flight