Living in Europe but adoring Japan, one of the most delightful ways to get there is on All Nippon Airways (ANA) in first class. Using 120,000 Virgin Atlantic miles (perhaps the best use of this points currency) I booked a return from Frankfurt to Tokyo Haneda, and was highly anticipating the trip. 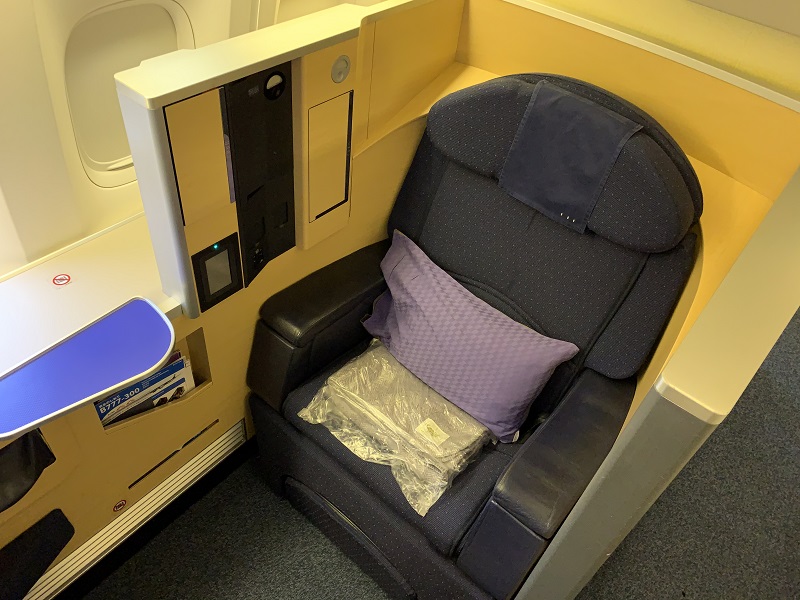 ANA’s first-class seat is spacious and private, although this is the older product that lacks doors — but this isn’t its key flaw. Rather, the fact that the window side of the seat blocks three of the four windows from view is the problem, and it’s a very annoying one when there’s both a lunchtime sunset and arrival sunrise with Mount Fuji in the pinkening morning sky to enjoy.

That, combined with the poor passenger experience departing from Frankfurt (on which more shortly), were the only things that stopped this flight from being perfect.

Notably, the bedding is excellent, with mattress padding, duvet and sheeting that the crew were only too happy to set up on the empty seat opposite as a separate bed.

A very pleasant dark blue suitcase-style amenity kit was filled with the usual goodies, including posh creams from The Ginza, but ANA also passes around a large basket with extra items including face masks (useful for keeping your mouth and nasal passages hydrated), lip balm, refreshing leg sheets (which are magical: see if you can grab a couple for when you have Museum Foot) and other items.

Slippers were, as one might expect from a Japanese airline, available, but were only one smaller size, which very much did not fit my size EU 48 feet. If you, too, have shoes the size of small watercraft, do as I do and bring a pair of (flipflops/thongs/jandals/insert your own national word here) for the plane.

ANA’s cabins are kept absolutely roasting, so I didn’t avail myself of the pajamas or zippy jumper available — rather, I brought my own shorts and polo to sleep in, and was very comfortable as a result. 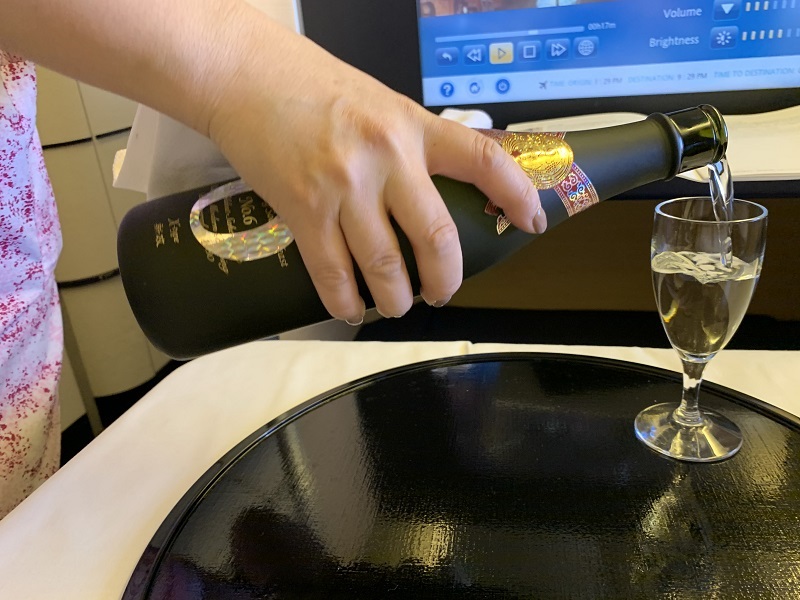 Omotenashi is a Japanese word that’s difficult to translate: it’s a sort of welcoming hospitality that anticipates needs, and it’s what makes Japanese airlines, from the cheapest low-cost to first class on ANA and JAL, so excellent.

It was well in evidence on this flight, with the crew remembering how I took my water (sparkling, light ice, no lemon), explaining about the different sakes, all the way down to presenting the bed with flowers and the signature ANA room fragrance on the side table. 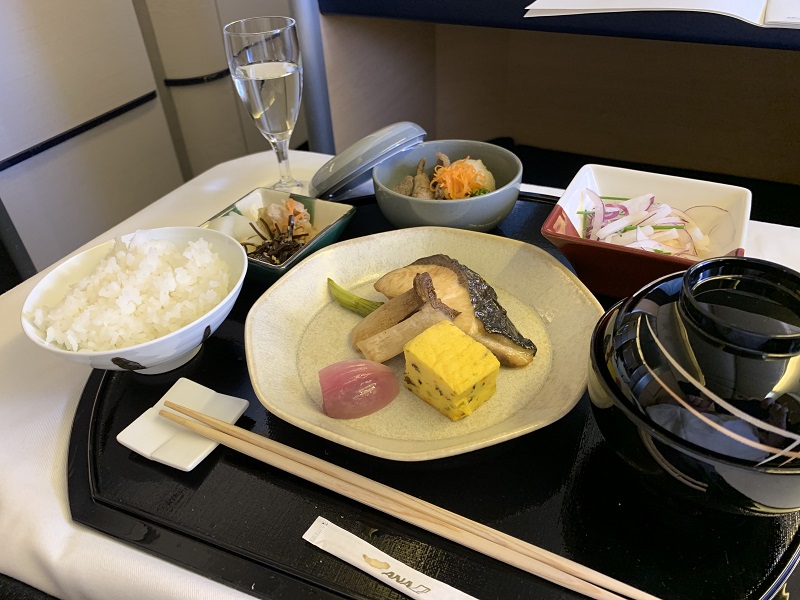 The catering on this flight was more than a pleasure — it was a true joy. After the just-before-noon takeoff, lunch was served, with an option of either a Japanese or Western-style meal.

Choosing the Japanese meal, it proceeded in the kaiseki multiple-course style, which works very well indeed on the aircraft, and every morsel was absolutely delicious.

I enjoyed a cross-tasting of Krug NV and Billecart-Salmon 2008 vintage Champagne with the savory amuse-gueules: the Krug is, as engineered, consistently outstanding, but the Billecart was delightfully biscuity and actually ended up working better with the food.

With the first three kaiseki courses, I enjoyed working my way through the three sakes on the list, in the order recommended by the flight attendant, and selected my favorite with the larger final course.

Naturally, with the 21-year-old Hibiki — consistently voted the world’s best blended whisky — on board, I had to have a glass, and the flight attendant insisted I enjoy it with some petit fours from the Western menu.

Before landing, I selected a variety of the Japanese snack options instead of breakfast: the satsuma-age fishcakes were delicious, and I asked the crew to add the pork katsu on top of the curry for a hearty meal that carried me the morning until lunchtime. 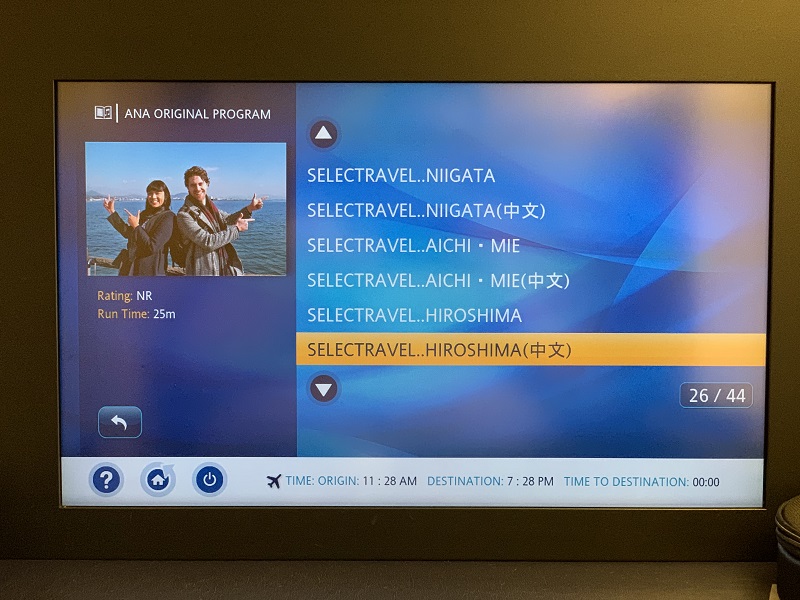 Surprisingly for what’s actually a fairly old product at this point, the screen was high-def, bright, and came with very good Sony noise-canceling headphones.

ANA invests in bespoke tourism content for its IFE, and it’s delightful in a uniquely Japanese way. The current set is called Selectravel, with two foreign visitors taking alternate trips through a particular province each episode.

Wifi is the very old and slow L-band, but first-class passengers are offered 100MB for free. While service dropped out for a few hours in the middle of the flight, I was surprised that social media, email and messaging actually worked relatively well: perhaps because the pricing-to-speed ratio is so poor that nobody else was on the system.

Even ANA can’t do much with the Frankfurt airport experience, with the ever-unpleasant security line, miserable airport ambiance and unimpressive Lufthansa Senator lounges well below first-class standard in any other major airport anywhere outside perhaps the United States, and even the American carriers are pulling their socks up. This is not a flight you want to be particularly early for out of Frankfurt.