Home AirAsia economy class: You get what you pay for

“Ended up with free accommodation at a five-star hotel in Bali… keen to join me?” read the text message two weeks ago.

Friends know I love a good holiday, especially one that costs me, well, nothing. There was no way I was going to pass up this opportunity.

The words from the boss were music to my ears: “If you have the leave, take it and have a great time”.

The words from my husband were a little more firm: “Get yourself off, but don’t spend a fortune”.

So, I found the cheapest economy class fare I could and booked this oh-so-very budget AirAsia flight to the land of the Bintang singlet.

First things first, this is a low-cost carrier and as with most budget airlines it does exactly what it says on the tin – gets you there with as much spare cash for pool-side cocktails as possible.

The seats were in economy-only, 3×3 configuration and as basic as expected – no adjustable headrests here. 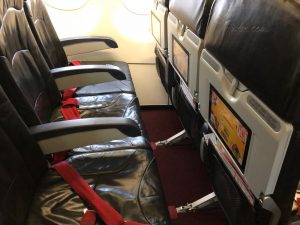 I had the aisle seat next to two six-foot-tall blokes who had no choice but to indulge in the ungentlemanly practice of “man-spreadding” to fit their knees behind the seats. As a, much more ladylike leg-crosser, I also found this a problem and found any slight movement left me kicking the seat in front of me. Anyone on the window seat who needed a visit to the toilet would need to evacuate the whole row to get past.

There was, however, a small recline and the 18-inch seat width seemed to be little issue for most passengers.

Blankets, pillows and eye pillows needed to be purchased from the cabin crew.

The seats might be as basic as can be but the staff were as chirpy as you’d get on any of the major airlines.

Aside from the Burger King red uniforms, there was little that said “budget airline” when it came to the service.

The cabin crew smiled incessantly and quickly responded to calls for service. As with most evening flights on this route, where passengers have had a couple of hours to indulge in the airport bar, there were more than the fair share of rowdy and rude passengers.

The staff handled them with ease and a smile but perhaps could have slowed down the drinks service to the odd passenger who maybe didn’t need another beer when they were swearing at the top of their lungs down the cabin.

This aside, the service was as cool and professional as anything I’d seen on similar low cost carriers – and some of the more expensive ones too.

First, a disclaimer. Dietary requirements and the fact that I’d already snacked in the airport meant I didn’t need to order a meal on this flight. 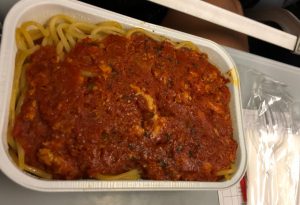 The passenger next to me ordered a spaghetti chicken dish which appeared bland and dull. Others ordered instant noodles and other cheap and basic dishes. Given at least half of the passengers didn’t appear to be eating a hot meal, the service was fast. It took only 45 minutes for the trolley to reach the back of the plane and the efficient staff returned to collect rubbish 15 to 20 minutes later.

Like most other things on the aircraft, a no-frills approach was taken to the menu. But 3.5 hours is not long to go without a meal if there’s nothing to your liking.

On boarding I clocked some seat-back entertainment screens – brilliant! 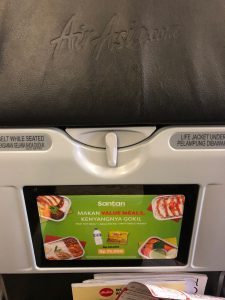 But, disappointingly it was to turn out to be only a seat-back advertisement for a 75,000 rupiah “value meal”, the likes of which I would memorise by the time the 3.5-hour flight was over.

Aside from an in-flight travel magazine and the duty free shopping brochure, you’d have to rely on a book or your own music to pass the time. It would be a good idea to board with your device fully charged, since there was no USB port available.

If the price, economy-only seating and lack of business suits wasn’t enough of a hint you were flying on a budget airline, the advertisements were the dead giveaway.

The overhead lockers were plastered with primary-coloured advertisements for “aromatherapy creams” and, bizarrely given Australia’s biosecurity laws, honey.

The aisle was decked in a fetching red carpet, reminiscent of a 1980s British pub. 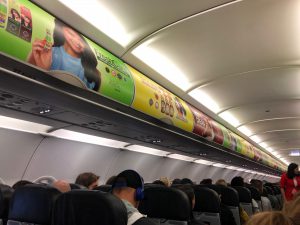 Yes, this flight was oh-so-very budget but when price is a factor and a five-star resort awaits you at the other end, it’s easily forgiven.

You really do get what you pay for on these sorts of airlines – and, as my husband will appreciate – I didn’t pay a lot.