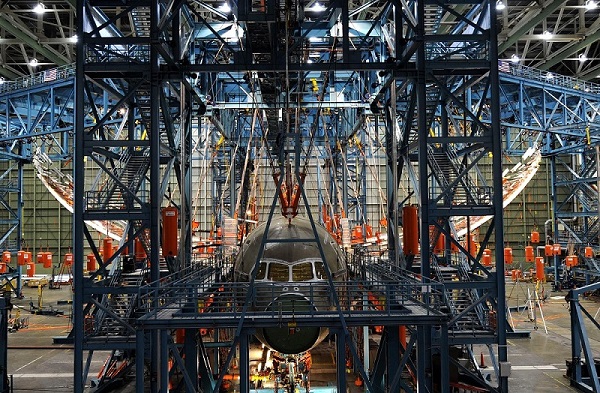 When French flying boat builder Rohrbach-Romar wanted to test the wing integrity of its flying boat in 1928, there were no such things as test rigs and computer modeling, so a couple of hundred production workers standing on the wings had to suffice.

In 1932, while aircraft design had advanced considerably, structural testing had not, so Douglas Aircraft was forced to use a steamroller driven across the wing to test the structural integrity of its DC-1 wing. The DC-1 was the forerunner of the famous DC-3 that taught the world to fly.

All manufacturers have to prove that the wing structure can carry the maximum design load in the most extreme conditions over the life of the aircraft. Hundreds of hydraulic actuators apply stress to the aircraft’s wing and there are thousands of gauges to measure the effect of the stress.

The wing is put through two lifetimes of structural stress before it is tested to 150 per cent of its design load. It must pass this test to be certified.

The size and weight of aircraft engines often concerns passengers. In fact, the engines mounted on the wing as on the 747 and A380, actually helps counteract the upward force of lift on the wing. Conversely, when engines are placed at the rear of the aircraft, its wings must be further strengthened.

A pylon, that attaches the engine to the wing is immensely strong and has survived exhaustive testing. So rest easy, the wing and engines are designed to bend and twist!!